Creative Writing Workshop seeks a private conference room in Midtown West, on the Upper West Side, or in Harlem/Morningside Heights for a series of Screenwriting, Fiction, and Memoir workshops and seminars.

We are a seven year-old successful writing workshop with past and current published writers and working editors.

Offering the key holder or business owner a private, one-on-one writing for uninterrupted access to a conference room for our three-month (12-weeks) workshops throughout the year: January - March, May - July, and September-November.

Our workshops are evenings only: Monday, Wednesday and Thursday, 6:30 pm to 8:30 pm. We don't want or need incoming or outgoing phone calls, Xerox, or facsimile.

We do however need a private space with access to a toilet. We're a responsible and mature group of writers looking for a new place to call home for the foreseeable future.

If interested, please respond with details about your location, and attach photos. We've a barter agreement ready for a serious offer. Please don't hesitate to contact us soon: info@morningsidewriters.com
Posted by Harlem Writer at 5:04 PM No comments: 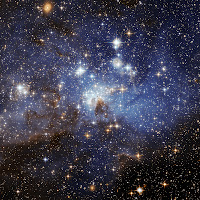 The ideal agent is able to work with minimal supervision, comfortable making cold calls, marketing and sales, and speaks and writes business English. Bilingual English|Spanish is a bonus.

Must have wireless-enabled laptop and cell phone. Should be familiar with performance spaces, festivals, and media|entertainment industry in the tri-state area (and eventual national venues), or a fast learner|great researcher. 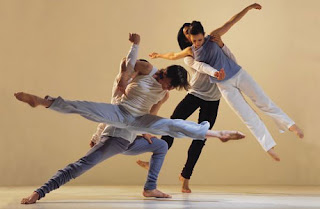 Package Less was a conceptualized dance performance based on Self Help, Inc., choreographed by Martha Williams of The Movement Movement, an emerging New York-based company established in 2005.

Dance unites all types and kinds of patrons – young and old, black, white, uptown Manhattan, downtown artists, and with a few tourists on holiday thrown into the mix. New York is a cultural destination after all.

I first noticed the sparsely decorated stage at The Joyce in SoHo, and wondered what might be on the bill as I pored over the program and looked around at the expectant faces in the intimate theater. There was a sense of anticipation as I scanned downstage right, at a TV and an antique chair. Multi-hued sofas occupied center stage, and upstage left a single chair pulled my attention away from three hand-painted curtains with leaves at the rear of the stage that brought to mind a forest. A collective quiet crept into the theater as a New York nightlife soundtrack hummed just outside the front door.

A dimly lit stage revealed a solo performer seated in a chair as haunting piano music slowly rose and filled the theater. A delicate hand appeared from one of the sofas, as if beckoning the audience to participate in the upcoming performance. I thought of Waiting for Godot as the actor sat with his back to the audience and adjusted what I might have come to expect from having read the playbill.

The succeeding images and sounds of an arguing couple and the actor pushing his chair backwards competed for my attention. Where should I focus? If I follow the couple, will I miss something that the actor in the vest does as he narrates the unfolding tale?

Industrial music signaled the next scene change as yet another body materialized from behind the sofa. The dancers were raw and physical, seemingly at ease with their subject matter, each flick of the wrist, gyrating hip, and extension cementing the story of human nature and surviving in a hostile world.

Is this a tale of a fractured, discontented or dysfunctional family? Are we peering beyond the fourth wall of an unhappy man and his mistress? What am I to make of the male dancer dressing on stage? What does it mean in the realm of self-help?

I didn’t know what to make of the slightly inaudible narration that seemed disconnected from the intended story the dancers were enacting. Where should my frame reference be as the sofas are moved about the stage? Am I in suburbia watching an adulterous affair and its painful consequences take place? Does the wife know and willingly accept?

Acoustic/electric guitar music transported the narrator to the corner TV, however the narration wasn’t loud enough, and perhaps would’ve been better if delivered via the speakers with the music lowered.

I searched for understanding in the hour-long performance that was meant to explore a woman’s sexuality and identity. Perhaps what appeared to be an affair was just that, and the choreography was spot on.

The domesticity of the sofas, chair and TV were to have located the audience in a sacred place and time, that of a home where all is revealed, without the crutch of masks many of us rely on to make it through the day.

I wanted to be drawn into this performance, if nothing more than to experience experimental dance and theater in one. I applaud dancers who give themselves over to choreography without question, especially when furniture is used as performance accompaniments. Art is subjective. Ethnic dance usually tells a story, be it West African dancers that defy gravity, Asian or East Indian footwork and hands that are alternately fast and slow.

Package Less is the choreographer’s interpretation of a nonfiction book, several ideologies, and thoughts which, to this viewer, didn’t coalesce.
Posted by Harlem Writer at 7:54 PM No comments:

No matter how strong your writing may already be, all writing can be improved through proper and effective editing. A great editor will make the difference between material that is compelling or forgettable.

We work with you to improve the content, style, tone, grammar, syntax and structure of your writing and written materials while maintaining the particularities of your own voice.

Manuscript Feedback: We provide professional analysis and evaluation of all aspects of your short story, novel, screenplay, or TV pilot or memoir with constructive recommendations for improvement. Our word-by-word proofreading and editing will enhance the content, structure and clarity of your written materials. A member of our team will work closely with you until grammar, syntax, spelling, and punctuation meet current professional standards.

Copyeditors work on an author's manuscript and are concerned with imposing mechanical consistency; correcting infelicities of grammar, usage, and diction; and querying internal inconsistencies of fact or tone. Proofreaders, in contrast, are charged with correcting errors introduced during the typesetting, formatting, or file conversion of the final document and with identifying any serious errors that were not caught during copyediting.

Our team approach ensures that you will be assigned an editor who understands your specific writing needs and has experience critiquing and editing similar work professionally. It also means we can offer you competitive rates for our services and a rapid turn-around on your writing assignments.

Contact us to begin your project, or for an estimate: Morningside Editorial Services bluepencil@morningsidewriters.com.

Workshops for Publishing Success!™
Posted by Harlem Writer at 11:08 AM No comments: 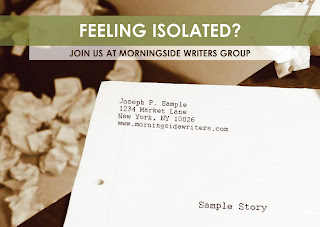 Resurrect your abandoned novel or short story collection from the bottom of your bureau drawers or from being used as a doorstop.

The reasons are unique and universal, but they exist all the same. We are committed to helping you revitalize your forgotten prose into a polished and marketable book, but we won't stop there.

We are looking for serious, reliable, and disciplined short story or novel writers with a body of work. We are seeking writers with a firm foundation of The Elements of Fiction Writing, versed in workshop dynamics, and able to give and receive constructive feedback.

We meet weekly on Thursday evenings, 6:30 p.m. - 8:30 p.m., in Midtown Manhattan. Each workshop is limited to six writers because it seems to be the best way to ensure that each member’s work gets the attention it deserves.

We use a glass booth format which allows for uninterrupted feedback during the workshop. It also forces everyone to listen to each other and streamline the feedback offered. Our goal is publication.

Morningside Workshops focus on learning and improving craft with a healthy dose of professional branding and marketing. The gradual result of The Morningside Method ™ is a well-rounded writer who might pursue an MFA, find an agent and build a career as a published writer, produced playwright, optioned screenwriter or working television writer who understands the creative, business and legal components of their career.

Morningside Writers Group is listed among other regional writing groups, writing centers, and workshops which offers alternatives to a full-time MFA degree program in the April 2009 Cover Story in the Writer Magazine, The L Magazine, and most recently in Time Out New York.

Posted by Harlem Writer at 12:42 AM No comments: